Colin Mackay Interview: First challenger who came over to US from Austraria and turn pro

One of my best friend Colin Mackay answered this interview.

Colin and I fisrt met at 1999 at X-Trails. GAMES. We became friends instantly.
Colin just came over from Austraria and gain the right to enter X-game because he won the last X-trails.
At that time he had no sponsors. But a few months later when I saw him on the TV.
He rode and wore Specialized bike and a Jerzy.
Later he rode for HUFFY then HARO and keep kicking ass.
I saw , hung out ,and rode with him pretty often, and we became pretty good friends.
I'm sure we will be still super good friends 20 or 30 years later.
I can't explain why but I feel it and believe it.

For people who don't know about Colin. Below is his lifestyle introduction at MTV.

This is my first interview with BMX riders who is also successful at his business.
Hope I can see something new.

This first interview is with Jay Miron who is one of the most innovative BMX rider.
Jay Miron has been a super pro rider since 1989. Now he runs couple BMX companies.

I met Jay Miron 19years ago. He has been my hero.
Beck then he was unstoppable. He invented more than 30 tricks including double back flip improves that.
For more of his detail view 23mag. 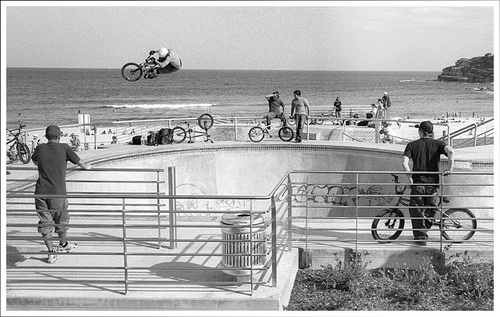